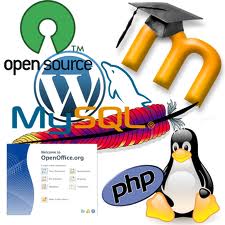 In previous posts I introduced the concept of Open Source, and also gave a quick appreciation of how it can play a role in such important deployments as eCommerce – and other important customer facing roles.

It’s clear that Open Source now represents serious competition to the traditional license fee software outfits, and the more agile of the larger software houses are evolving to defend against it, whilst some are burying their head in the sand.

Why has Open Source brought about change in Traditional houses?

Open Source has not grown just because of its “free” acquisition cost
We’ve established two additional, important attractions for user firms of all types and sizes, in all geographic and vertical markets, namely:

The well used“Bill Gates Defence” pays regard to Total Cost of Ownership. This was a a few years ago when the only the only credible threat Open Source carried was on grounds of cost – but now, in 2013, their software houses need to defend on more fronts than just cost.

Microsoft have a new fear of theft of Intellectual property, or directly treating Microsoft products as a functional specification for an Open Source equivalent (OpenOffice is free and fully compatible with files created by Microsoft’s version).

VMWare tackled the OS threat by releasing an OS version of their system.

SAP, however, think that their position as an enterprise back end system makes them outside the target demographic of the Open Source threat.

We have seen that PR was originally used by Microsoft – the Total Cost of Ownership, and now the question of Intellectual Property.

Not sure this is viable given the increased technical credibility of OS.

Rather than combating directly against OS, it’s becoming more commonplace to find software houses leaning towards it…

In some cases segmenting software into free entry level products as compared to a fully featured or scalable version, or the VMware model as shown…… This ensure brand visibility and market share but demands that traditional license fee revenue has to be recouped through other means.

A Moment of Clarity

Is Open Source responsible for, or a reaction to the fact that the charges model for software is evolving?

It seems that the “license fee” model of charging for software is no longer a palatable way to buy software. Therefore it’s easy to see why the low cost of acquisition of Open Source is attractive.

However, there are other models which enable traditional software houses to recoup the cost of software development – and that is to drive revenue through service and support. And more importantly to deploy software through a Software as a Service (Saas) model.

In a SaaS model, the license fee rather than being a lump sum up front (this is the part that’s no longer palatable) could be amortised over a fixed period – the software license is rented.

A more pure SaaS model is to forget any notion of software license fees, and simply charge a subscription fee to a service. In this model software becomes more of an internal tool of the service provider, and the value to the customer is more about delivery of business services that benefit rather than delivery of software that benefits!

Is this, then, the crux of the Open Source question – not whether the code is visible or not, but how software delivers benefit to it’s customers?